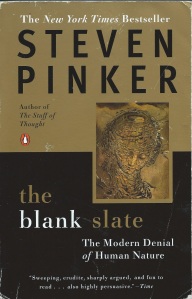 I have recently engaged in several conversations with people from outside of the field of early childhood education in which the conversations turned to the topic of nurturing.  These conversations have caused me to stop and think.  What does it mean to be a nurturing teacher?  How does that differ from the role of a nurturing parent?  How does my maleness impact both my ability to be nurturing as well as society’s interpretation of the nurturing role that I play?  What forms of nurture occur outside of the family and instructional environment to impact children’s growth and development?

In his book, The Blank Slate, Steven Pinker argues that there may be no impact of nurture whatsoever on a person’s personality development.  He suggests that “the nongenetic component of personality is the outcome of neurodevelopmental roulette” (2002, p. 397) and that personality is shaped largely by random chance and not by any environmental factors.  While the idea that environment has no impact on personality may seem a bit extreme, Pinker makes the point that we need to view children not as “lumps of putty to be shaped,” but instead as “partners in a human relationship” (2002, p. 399).

Does this mean that we should not nurture our children?  Of course not.  Pinker suggests that a nurturing parental role is an essential part of this human partnership.  As a teacher, I see my students as my family, my children.  I see the children’s parents as extensions of my own personal family.  This bond is so strong that I am still in touch with the families of students even from my first year of teaching, now nearly seven years ago.

Pinker warns that “Family love indeed subverts the ideal of what we should feel for every soul in the world” (2002, p. 245) because “the balancing of competing interests that governs all human interactions does not end at the door of the family home” (2002, p. 251).  But he also suggests that, as with my extension of my students as part of my family, human beings in general have this capacity to widen their circle of definition for family, and that this capacity can ultimately serve a globally unifying purpose.

According to Pinker, “The observation that people may be morally indifferent to other people who are outside a mental circle immediately suggests an opening for the effort to reduce violence: understand the psychology of the circle well enough to encourage people to put all of humanity inside it” (2002, p. 320).  In answer to the question of what it means to be nurturing, I see it as having the emotional sensitivity to widen that circle and provide care for others as though they were family.

With this definition of nurturing in mind, it should come as no surprise that human males have nurturing capabilities, particularly when Pinker points out that “the male of Homo sapiens differs from the male of most other mammals in a crucial way: men invest in their offspring rather than leaving all the investing to the female” (2002, p. 252).  In other words, one of the characteristics of our uniquely human nature is the nurturing capacity of our males.  This would seem to run counter to many of the ways men are encouraged to view themselves.

If asked to list the characteristics of masculinity, most people would probably be unlikely to include ‘nurturing’ on that list, whereas it would likely be one of the first characteristics of femininity.  In fact, if the two lists were to be put in a Venn diagram, the overlapping section would likely have little, if anything, written in it.  The reality, as Pinker points out is actually strikingly different.  “Men and women have all the same genes except for a handful on the Y chromosome, and their brains are so similar that it takes an eagle-eyed neuroanatomist to find the small differences between them” (2002, p. 344).

So why, then, is there a fear of men in nurturing fields?  I have repeatedly been advised to be wary of physical contact with children.  Sometimes it has come in the form of cautionary warnings, and other times it has come in the form of direct mandates not to allow the children to sit in my lap or not to change diapers or assist at potty-time.  It always comes from a benevolent place where they are providing me these cautions “for your own protection,” but I can’t help but wonder what message it sends to the children when the men who care for them are not engaging in a number of inherently nurturing acts that are regularly engaged in by women in the same position.  If people are trained from childhood to view gender roles in this manner, the discriminatory values will be passed on to the next generation.

While I disagree with Pinker on a number of his interpretations of contemporary cognitive theory, there is one point he makes that I absolutely agree with him on.  “One ought not to assume that the default human being is a man and that children are an indulgence or an accident that strikes a deviant subset” (2002, p. 358).  When we delegate nurturing roles solely to females, particularly in a society that, by and large, does not place value in those roles, we are creating a division that promotes discrimination and subjugation.

Next month I will be discussing the book Nature Education with Young Children, edited by Daniel R. Meier and Stephanie Sisk-Hilton.  If you have a book that you would like to see me discuss in this blog please comment on the Recommended Reading page.

This work is licensed under a Creative Commons Attribution-ShareAlike 3.0 Unported License.