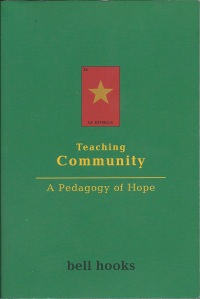 “No one is born a racist.  Everyone makes a choice.  Many of us made the choice in childhood.”

Racism is an issue that permeates society, and, as much as teachers may wish to make them so, our classrooms are not immune to the effects of such a society.  In her book Teaching Community, bell hooks tells us that “To build community requires vigilant awareness of the work we must continually do to undermine all the socialization that leads us to behave in ways that perpetuate domination” (2003, p. 36).  It is not enough to create classrooms in which we seek to avoid dominance, but rather we must create spaces in which to actively counteract questions of bias as they situate themselves within our environments.

Every classroom I have worked in has had varying degrees of diversity.  In all my years as a teacher I have never worked in a classroom in which all of the children had similar cultural upbringings.  I recall one primary school classroom in which, in addition to the four other languages spoken in the classroom there was one particular student who had recently emigrated from an eastern African nation and, unlike the other students, didn’t speak any English at the start of the school year.  As I struggled to learn his home language, he struggled to learn English and to cope with the drastic cultural and racial differences that existed between him and his diverse classmates.

These differences led to conflict, at one point even escalating to a physical brawl involving multiple children when another child made fun of his appearance.  hooks reveals that “this is a looks-oriented culture, from grade school on we know how much looks determine whether individuals will be treated justly, respectfully” (2003, p. 113).  Whether a child wears glasses, is a darker shade of brown, or happens to be a boy with long hair, without guidance children will find ways to ridicule and ostracize someone who does not conform to the dominant appearance within the classroom.

But this doesn’t necessarily mean that this is the way things have to be.  hooks indicates that “the presence of conflict is not necessarily negative but rather its meaning is determined by how we cope with that conflict” (2003, p. 64).  She suggests that teachers can create an alternative environment by promoting and modeling caring situations.  “The loving classroom is one in which students are taught, both by the presence and practice of the teacher, that critical exchange can take place without diminishing anyone’s spirit, that conflict can be resolved constructively” (2003, p. 135).

In order to be able to resolve those conflicts constructively, children, particularly younger children must feel that they are in a safe place.  They must feel that the classroom is a place where love is greater than anger.  hooks states that “Love can bridge the sense of otherness.  It takes practice to be vigilant, to beam that love out.  It takes work” (2003, p. 162).

This is something that I strive to do in my classroom.  I greet every student in the morning with a hug as they enter the classroom.  When a child is crying, whatever the reason, I make an effort to comfort them, even if the reason they are crying is because they had just gotten in trouble.  I don’t believe in using ‘time-outs’ or exclusion in general.  The only time I will remove a child from the group is when that child is demonstrating a desire to be removed.

I have heard it said by some teachers that the ‘time-out’ serves the purpose of allowing the child to be alone in order to calm down.  But I find that when a child is angry, a hug often serves a calming purpose to a much greater extent than the ‘time-out’ would.  While there are occasionally children who prefer to be alone at times, usually they prefer the hug to the isolation.  Even children with sensitivities to physical contact still tend to prefer the presence of another person to separation, and comforting gestures can take a form as simple as offering a hand to hold or a tissue to dry the tears.  This seems to me to be a very human reaction.  In classrooms where I have been able make this a regular practice, the children take up this mantle of caring, and will themselves go to offer comfort in the form of a hug or a tissue when they see another child in need, even if it is a child with whom they will at other times enter into conflict.

Starting from this place of caring, it then becomes possible to address conflict in differences from an open place.  As hooks says, “Caring educators open the mind, allowing students to embrace a world of knowing that is always subject to change and challenge” (2003, p. 92).  Children come to learn that, despite differences, all of us have commonalities, and that those differences can come to be celebrated.  They also learn to look beyond the physical differences to discover that we have differences in personality that are much more significant and make for a more engaging and interesting environment.  As bell hooks puts it,  “finding out what connects us, revelling [sic] in our differences; this is the process that brings us closer, that gives us a world of shared values, of meaningful community” (2003, p. 197)

I welcome and encourage comments and discussion on this post.  What ways do you bring love into your classrooms or life?  Do you feel that time-outs or hugs are an appropriate way to give children space to calm down, or is there another alternative?  What do you believe is the best way to help children look beyond physical differences and come to appreciate diversity?

If you have a book that you think would interest me and would like to see me discuss in this blog, please feel free to comment with your recommendation.  Based on a suggestion by a reader, next month I will be discussing Gestures: Their Origins and Distribution by Morris, Collett, Marsh, & O’Shaughnessy (1979).

This work is licensed under a Creative Commons Attribution-ShareAlike 3.0 Unported License.